DAVIS COUNTY, Utah, June 9, 2019 (Gephardt Daily) — A 27-year-old Davis County woman is behind bars after police say she assaulted her daughters, ages 2 and 4, with the intention of killing them.

Karen Suzanne Butterfield told the arresting Layton Police officer that she did this “to prove a point to her husband,” according to a probable cause statement filed in 2nd District Court in Farmington.

Police responded Saturday to a domestic violence incident at the home, where it was determined that Butterfield had assaulted the two little girls with the intent to cause their deaths, first by attempting to smother them with a pillow, the statement says.

Her husband intervened, so Butterfield “then locked herself in a room with the two girls and strangled them with her hands, causing visible injury to their necks.”

Her husband again intervened by prying the mother’s hands off the 4-year-old and, when Butterfield then began strangling the 2-year-old, her husband had to forcibly “free her youngest from her grasp,” the probable cause statement says.

According to the statement, the couple had been arguing, and “Karen was recorded by her husband as saying she was going to kill herself and her daughters.”

“When Karen was fleeing, she caused damage to the garage door and multiple items in the garage,” the statement says. She also tried to pry the garage door with a knife in an attempt to get back into the house.

She was located and interviewed by the police. After being Mirandized, she stated that she had wanted to “prove a point to her husband that his actions of recording her had pushed her to this course of action.”

Both children survived the incident, police confirmed, although Butterfield has been technically charged with 2 counts of child abuse homicide. Those holding charges will be modified as the case moves forward.

Karen Butterfield also was arrested in March this year for criminal mischief, after police responded to a report of domestic violence at the home and learned that she had stuck a knife into the refrigerator during that altercation, according to the charging document from that incident. 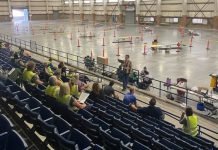