SALT LAKE CITY, Utah, June 27, 2018 (Gephardt Daily) — A man was transported to the hospital late Tuesday night after a heated disagreement ended in a stabbing at North Temple Street and Redwood Road.

“There’s a large transient camp there, and those people were having a discussion with a couple of people walking down the sidewalk on North Temple,” Cracroft said.

He said the discussion moved back to the camp, where it escalated into a disagreement.

“The suspect who was walking down the street came over, pulled out a large folding knife, and went after our victim,” Cracroft said.

The victim tripped and fell down, and was then stabbed in the leg.

The suspect and a girl who was with him took off running northbound through the Sutherlands lot and into the neighborhood.

Cracroft said several witnesses saw the pair running , but police were unable to catch up with them before they disappeared into the darkness. Officers and a K-9 unit searched the area without success.

The victim was taken to Intermountain Medical Center with a stab wound to his calf, but Cracroft said the man’s injury wasn’t serious.

The suspect is described as Caucasian, 6-feet-2-inches tall, with a thin build, and was last seen wearing a red T-shirt and shorts. 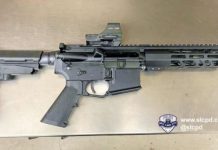 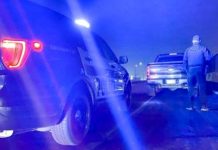 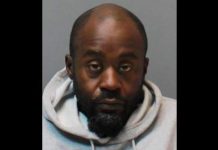