Luckily there were no casualties reported in the 6:55 p.m. mishap at 602 North Harrisville Road, just north of the WalMart, except for the power pole, said Harrisville Police Sgt. Nick Taylor.

The driver was cited for improper lane change, Taylor told Gephardt Daily Daily. “He said he looked down a minute and there he found himself.”

No drug or alcohol impairment is suspected, he said, just a distracted driver. The power pole was sheared off at the base, held up by power lines, he said. It wasn’t clear how soon Rocky Mountain Power, a 3-state company, would be able to ship in a replacement pole.

Some nearby structures experienced an outage, he said, but it apparently wasn’t extensive as the lights were still on at the nearby Walmart and a traffic semaphores a block away.

But as of 10 p.m. two blocks of Harrisville Road were still blocked off at the site three hours later as the power company’s repairs ensued, Taylor said, and were estimated to take another two or three hours.

North Ogden and Pleasant View police assisted in blocking off the road until barricades could be erected. 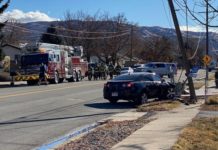 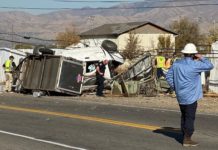