SALT LAKE CITY, Utah, June 15, 2016 (Gephardt Daily) — A Unified Police Officer will not be criminally charged for shooting an innocent bystander, according to the Salt Lake County District Attorney’s Office.

After a full review of the incident, the D.A.’s Office announced the decision Wednesday.

“The D.A.’s Office could not conclude that the use of deadly force was ‘justified’ pursuant to Utah state law,” said an official document from the D.A.’s Office.

The D.A.’s Office said that on Oct. 30, 2015, a suspect identified as Jeremy Bowden, 33, fired six shots at Unified Police Department officer Cory Tsouras in his patrol car after the officer spotted him in a stolen vehicle.

Tsouras drove away from Bowden towards the Rocket Express car wash at 150 W. 7200 South. Police said Tsouras got out of his patrol car to survey the area when Bowden fired more shots at Tsouras. A bullet proof vest is credited for saving Tsouras’ life.

In the heat of the moment, Tsouras saw a man he thought was the assailant trying to enter the car wash.

The bystander, Dustin Evans, was not the gunman. He was a civilian trying to find safety from the gunfire. Tsouras fired two shots, striking Evans in the arm and leg. Evans survived the shooting.

Bowden ran into a nearby apartment complex where he was Tased and captured by police a few minutes later.

“Officer Tsouras retreated from his vehicle and while doing so, lost sight of the person shooting at him,” an official document from the D.A.’s Office said.

After a lengthy investigation, the D.A.’s Office has determined it will not file criminal charges against Tsouras for his Use of Deadly Force, because it cannot be proven to a jury the officer had criminal intent. 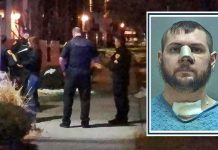 DA Sim Gill says use of deadly force justified in February police shooting; offers emotional thanks to officers trying to save hostage