TOOELE, Utah, June 8, 2017 (Gephardt Daily) — A double-trailer semi that lost control in downtown Tooele Thursday afternoon knocked down a power pole, caught on fire, and closed down traffic and then power to the area for about 90 minutes.

Sgt. Tanya Kalma, Tooele City Police Department, said that officers responded at about 2 p.m. after being called to the accident, at 850 N. Main St.

The driver of the double rig had suffered a minor medical emergency of some sort, Kalma said, and veered to the right side of the road, where he struck a power pole.

The transformer fell, with portions landing on each of the two trailers, sparking a small inferno. It happened in front of a business called Victor’s Tires. Its van, parked on the street, was charred by the heat.

The fire could not be fought until Rocky Mountain Power was able to shut off electricity to the area. After it was, the fire was put out fairly quickly, Kalma said.

But turning off power also affected nearby traffic lights, adding to the congestion downtown, Kalma said.

As of about 3:30 p.m., the power was restored and traffic returned to normal, Kalma said. The driver who had the medical incident was treated and released at the scene, she said, and no one was injured in the incident. 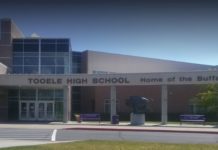