MIDVALE, Utah, August 31, 2017 (Gephardt Daily) —  Dramatic video has surfaced of a fast-moving wildfire which came close to torching a number of homes and commercial structures in Midvale Wednesday night.

Scott Hinckley captured the images, as the wind-whipped fire — thought to have been started by a lightning strike — burned perilously close to an apartment complex and several business buildings.

Unified Fire Authority Battalion Chief Steve Prokopis told Gephardt Daily the fire broke out around 8 p.m. in the area of 8200 South 700 West. He said what started as a relatively small fire suddenly exploded, driven by gusting winds and fueled by field full of dry grass.

About 15 acres went up in flames in a matter of half an hour before firefighters were able to knock it down.

Battalion Chief Prokopis praised the quick work of the 30 plus firefighters who responded to the blaze. “Given the wind conditions, we feel pretty fortunate we did not lose any structures today,” he said.

Fire crews remained on scene throughout the night mopping up hot spots. 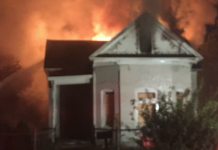 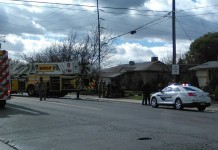 Midvale Man Sets Box On Fire And Takes It Inside Home 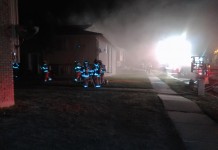