“One of our officers pulled into this station to get some gas, and discovered a traffic accident,” Lt. Paul Barker, Unified Police Department, told Gephardt Daily at the scene at about 4 a.m.

A black car trying to take a curved turn from Highland Drive onto the Van Winkle Expressway left the roadway, struck a gas pump, then crashed into a dumpster and the wall of a Philips 66 station at 6070 S. Highland Dr.

“It appears some excessive speed was involved,” Barker said. “It went over the little grass hill, took out a street sign, came through the gas station, hitting a couple of the gas pumps, then went over and hit the building. There’s no occupants at all in the vehicle. No driver, no passengers. We’re currently running the plate.”

The car’s plate came back to a bad address, Barker said, so police were following other leads to track down the person on the car’s registration.

“So we’re doing some investigation to figure out who the driver is, first to make sure they’re OK, then to have someone responsible for all this damage here.”

Barker said a pump was a little twisted, but “it appears shut off valves did their job. There’s no gas leak, and you can’t even smell gas around.

“When it hit that dumpster, shot a lot of garbage out,” Barker said of the trash strewn scene.

Without a driver, no test could be done for driving under the influence. Barker said charges would likely include speeding.

“We’re kind of guessing there’s more to it, but got to find the driver to determine that.” 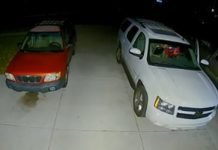