WEST VALLEY CITY, Utah, Jan. 20, 2021 (Gephardt Daily) — A man died Wednesday night when his westbound car jumped a cement median and was hit by a larger eastbound vehicle on 4100 South at about 1600 West.

“He was partially ejected, and with his injuries, there was no way he could have survived,” Lt. Bill Merritt, West Valley City Police Department, told Gephardt Daily.

“He was not wearing his seatbelt. It was fairly obvious from the get-go that the person who jumped the median was deceased on the scene.”

Witnesses said there was no indication why the car would have jumped the median, and the man was not driving recklessly prior to the accident.

Merritt said the accident was reported at about 8:40 p.m. Wednesday. The victim’s car was badly mangled, but it is believed to be a either a Chevrolet Cavalier or Cobalt, both relatively small cars. It collided with a Ford Expedition, a large SUV, Merritt said.

“He was an adult and the single occupant,” Merritt said of the victim. “We are trying to estimate his age. He’s probably in his 40s.”

Two or more people were in the Expedition, and no injuries were reported by the driver and passenger(s), the officer said.

Merritt said at about 9:30 p.m. that investigators had arrived minutes earlier to document the scene. The eastbound lane of 4100 South, between Redwood Road and 1600 West, will be closed for at least a couple hours, he said. 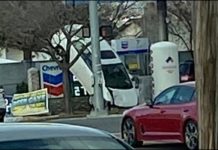