GRANTSVILLE, Utah, April 19, 2020 (Gephardt Daily) — A Grantsville man with a history of DUI arrests allegedly hit a pedestrian while driving under the influence again, according to court documents.

A probable cause statement from the 3rd District Court of Tooele said Daniel Vincent, 68, is facing charges of:

On Thursday at approximately 9:40 a.m., the arresting officer responded to an accident involving injuries, the statement said. The suspect vehicle had already left the scene. The victim, a pedestrian, was hit by a vehicle travelling east in the area of Worthington Street and Durfee Street in Grantsville.

“The victim sustained an injury to his left arm and believed it may have been broken, which was later confirmed by hospital staff that it was broken,” the statement said. “The victim provided a description of the suspect vehicle and the driver side mirror, which had been broken from hitting the victim, was still on the scene. The suspect also hit a vehicle in the same incident and a description of damage location to the suspect vehicle was provided.”

At approximately 12:30 p.m., a reckless driver was reported to dispatch on I-80. The vehicle matched the description and description of damage for the suspect vehicle involved in the accident, the statement said. The arresting officer saw the vehicle on State Route 138 in the Sheep Lane area.

“The vehicle matched the description provided by the victim and had damage to the rear end and driver mirror, as described to me by the victim of the accident,” the statement said. “I initiated my emergency lights and sirens and attempted to conduct a traffic stop. The vehicle continued driving and I witnessed it swerve into oncoming traffic multiple times as well as into the shoulder of the road. The vehicle eventually came to a stop at approximately Lamb Lane, a few miles down the road.”

The arresting officer conducted a felony stop and witnessed multiple signs of impairment in the suspect including glossy eyes, slurred speech, and poor balance, the statement said. Vincent was placed under arrest and transported to the Grantsville Police Department. While at the police department, field sobriety tests were conducted and the suspect was found to be impaired.

Vincent was transported to Tooele County Detention Center with his bail set at $5,000. The charge of DUI was enhanced due to prior felony DUI convictions. 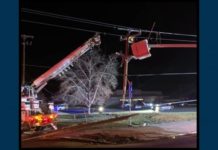