HUNTSVILLE, Utah, Sept. 9, 2022 (Gephardt Daily) — The driver of a dump truck that lost its brakes and ended up in a deep ravine near Pineview Reservoir was airlifted to an area hospital in serious condition Friday.

Several law enforcement agencies responded about 2 p.m. to a crash on State Route 167, also known as Trappers Loop Road, near the intersection with State Route 39, according a Facebook post from the Weber Fire District.

“Emergency crews arrived on the scene to find a dump truck that had come to rest in a heavily wooded, deep ravine … after losing its brakes,” the post states.

Crews also worked quickly to control a fire that had started in nearby vegetation as a result of the crash, fire officials said.

The driver was ejected from the truck and sustained serious but not life-threatening injuries, the post states. They were transported by medical helicopter to an area hospital, according to the fire district.

Crews used two drones to search the area following reports of a possible second passenger in the dump truck, according to the Weber Fire District. A second passenger was not found, officials said. 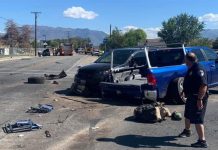