A probable cause statement from the 5th District Court of Iron County said Jacquez Garfield Wright, 28, is facing charges of:

The probable cause statement said the arresting officer responded to a report of a traffic accident Sunday morning at Rita’s Taco at 1098 W. 200 North in Cedar City, involving “a black male driving a gray Dodge Journey with Nevada plates.”

As the officer approached, he saw the Journey stopped at the end of the McDonald’s drive through adjacent to the taco shop.

As the officer stood approximately 10 feet from Wright, he smelled the strong odor of an alcoholic beverage coming from his person, the statement said.

“I attempted to inform Jacquez of the reason for contact, and in his brief response, observed him with slurred speech,” the statement said. “After Jacquez seemed to understand the reason for contact, he began to become agitated and pace around the scene. I informed Jacquez that he was not free to leave, and requested that he stand in a specific place.”

Wright then walked backwards away from the officer, and the officer thought he was going to flee. The arresting officer and another officer stopped Wright and placed him in handcuffs.

“I searched Jacquez subsequent to arrest, and found a small bag of marijuana in his right pants’ pocket,” the statement said. “I told Jacquez to sit in my vehicle, but he refused. The other officer and I attempted to place Jacquez in the vehicle, but he physically resisted.”

“During this close interaction, the subject was belligerent, and the odor of alcohol became extremely strong,” the statement said.

A DUI search warrant was approved and the arresting officer attempted to serve the warrant on Wright at the Cedar City Hospital. Due to the subject resisting, the phlebotomist could not properly conduct the blood draw. A decision was made after consulting the city prosecutor, to charge Wright with DUI “based on my observations and the witnesses statement regarding the traffic accident,” the arresting officer wrote.

“During my times with Jacquez, he offered me $50,000 to release him,” the statement said. “I was not concerned about this statement initially, but Jacquez later offered $12,000, and later $10,000 for me to release him. Throughout my interaction with Jacquez, he claimed several times to be very wealthy, and was in possession of over $500 cash. These offers were recorded, along with the rest of the incident on body-worn camera.”

The suspect was transported to Iron County Jail with his bail set at $10,000.

Man dies while in custody at Iron County Jail 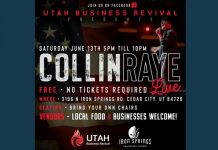