Although the area will remain open for day use and fishing access, overnight camping will no longer be allowed.

The East Fork Little Bear Wildlife Management Area is just west of Porcupine Reservoir along East Canyon Road in Paradise, and was acquired from a private landowner in the late 1980s to open the one-mile stretch of river “to public anglers and to ensure it would stay open to fishing forever,” says a DWR news release.

It was not originally purchased to be a public camping spot, but the DWR decided to allow camping there, with the expectation that campers would take good care of the area. Unfortunately, although most campers are respectful, too many have failed in that regard.

“The misuse of the area by campers has included leaving trash and human excrement scattered across the WMA,” DWR Northern Region Habitat Manager Daniel Olson said in the news release. “Wooden fences on the WMA have been broken apart, chopped up and used as firewood. Campers have also left campfires unattended and have built them even when campfire closures were in effect on the WMA. Roads and habitat have also been damaged. We’re going to reclaim and improve the area and make it a great place to fish again.”

Before acquiring the property, the East Fork Little Bear basically ran through it in a straight line, the news release says. After acquiring it, DWR biologists altered the flow of the river, placing bends and meanders that changed the flow of the water, creating additional pools and riffles for fish. According to the DWR, the one-mile stretch is an especially good place to fish for brown trout in the fall, and cutthroats are another species anglers sometimes catch.

“We encourage anglers to come to the East Fork Little Bear WMA and enjoy a day of fishing,” Olson said. “We’ve worked hard to improve the river and make it a great place for fish and anglers.” 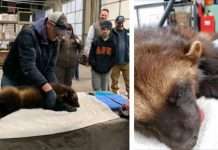