Officers received a report of the poaching after several people witnessed a man shoot at a buck pronghorn several times on Lake Mountain, near the communication towers in Utah County, around 8 a.m. on June 3, said a news release from the Utah DWR.

The pronghorn was eventually killed and was left at the scene. There was no pronghorn season at the time of the shooting.

“Witnesses reported the man was wearing blue jeans and a white jersey-style shirt with a number on the back at the time of the incident,” the news release said. “The man left the scene in a newer, white, four-door truck, with either a gray or silver stripe. Witnesses said the vehicle may have been a Ford. The vehicle was last seen driving toward Stillwater Canyon near Saratoga Springs.”

Anyone with information regarding the illegal killing of this pronghorn, or any other wildlife, is encouraged to contact the UTiP hotline at 800-662-3337. You can also report any illegal wildlife activity on the DWR website.

If you have information about this specific case, you can also contact DWR Conservation Officer James Thomas at 801-503-4070. Rewards are available and requests for confidentiality are respected. 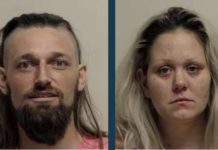