SALT LAKE CITY, Utah, July 14, 2016 (Gephardt Daily) –– A large majority of U.S. drivers have admitted they were responsible for some form of road rage while behind the wheel over the past year, according to a new study released today by the AAA Foundation for Traffic Safety.

Nearly 80 percent experienced significant anger or aggression, and approximately eight million drivers say they have engaged in extreme road rage, including intentionally ramming another vehicle or physically confronting another driver.

“Far too many drivers are losing themselves in the heat of the moment and lashing out in ways that could turn deadly.”

The study also shows most drivers believe aggressive driving is a bigger problem today than three years ago, and aggressive drivers are a serious threat to their personal safety.

“It’s completely normal for drivers to experience anger behind the wheel, but we must not let our emotions lead to destructive choices,” Fairclough said.

“Don’t risk escalating a frustrating situation, because you never know what the other driver might do. Maintain a cool head, and focus on reaching your destination safely.”

A statement from AAA said there are ways to keep road rage from escalating, and encouraged drivers to never cause another driver to change their speed or their direction by slamming on their brakes or forcing someone off the road.

Realize that people can be having a bad day, and try not take it personally, AAA suggested. Avoid eye contact, don’t make any gestures, and call 911 if necessary.

The research report is available on the AAA Foundation’s website and is part of the annual Traffic Safety Culture Index. 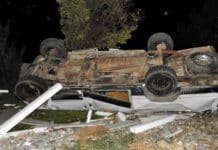