ST. GEORGE, Utah, May 28, 2020 (Gephardt Daily) — An elderly couple were killed Thursday morning in a single-vehicle crash in St. George.

“At approximately 10:15 a.m. this morning a newer Honda truck, travelling east on Indian Hills Drive, passed through the light at Hilton Drive and struck a structural column in front of Moto Zoo,” said a news release from St. George Police Department. “The truck was occupied by a husband and wife, ages in the late 80s and early 90s.”

Both occupants of the vehicle sustained life-threatening injuries at the time of the collision, the news release said. The female occupant passed away on scene. The male occupant was transported to Dixie Regional Medical Center by ambulance but succumbed to his injuries and passed away despite life-saving efforts.

“The St. George Police Department Accident Reconstruction Team, Investigations Division, and Patrol Units responded to the scene to investigate the incident,” the news release said. “That investigation is ongoing to determine the factors leading up to, and/or contributing to, the incident.”

The names of the deceased couple have not been released pending notification of family.

“We would like to thank St. George Fire, Gold Cross EMS, and UDOT’s Incident Management for their assistance in the incident,” the news release said. 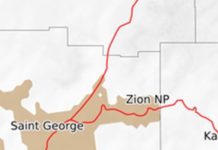