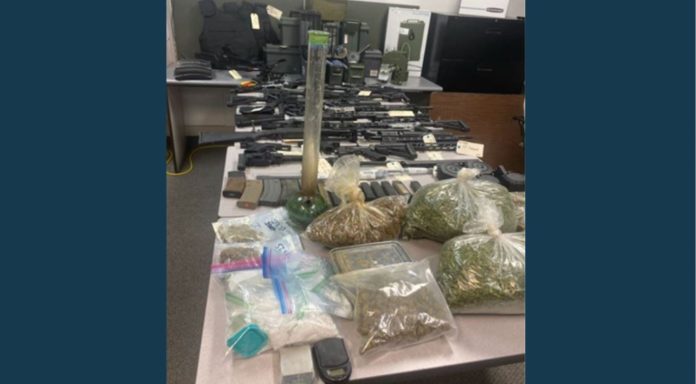 EMERY COUNTY, Utah, July 19, 2022 (Gephardt Daily) — A man wanted on a warrant out of California on drug and weapon charges has been arrested at his home, in Orangeville, where he recently moved.

John Douglas Goodrich, 60, was arrested Sunday on a $250,000 warrant for fleeing while facing weapons and drug-related charges, a statement from the Emery County Sheriff‘s Office says.

A deputy learned on Saturday that Goodrich was living locally.

“While the Deputy was searching for information on Goodrich, he learned about the warrant,” the ECSO statement says.

“He tried to make contact with Goodrich at the home, but Goodrich would not answer the door.”

“Research for the search warrant revealed that Goodrich had a lengthy criminal history dating back to 2006. In November 2021, Goodrich was charged with multiple weapons offenses in California.

“On Sunday, July 17, 2022, seven patrol Deputies and one Patrol Sergeant from ECSO converged on the house to execute the search warrant and take Goodrich into custody. After knocking on the door a few times with no response, the front door of the residence was breached.”

ECSO’s K-9 Team made initial entry and gave several commands for anyone in the house to present themselves.

“With no response, K-9 Deputy Dak was deployed to search the house followed by other ECSO personnel who cleared rooms. K-9 Deputy Dak gave an alert at a locked bathroom door, at which time commands were given to the person behind the door. Goodrich answered the commands, surrendered, and was taken into custody without incident,” the statement says.

“Two loaded weapons were also located in the bathroom where Goodrich was attempting to hide.”

Goodrich is facing 17 felony and six misdemeanor charges relating to firearms and drugs, the statement says.

“ECSO personnel have put a lot of good, hard work into this case from the time that Goodrich was first noticed in our area through obtaining a search warrant,” it says. “They responded to execute the search warrant and take Goodrich into custody knowing his criminal history and knowing the potential dangers they could face. After Goodrich was in custody, the work continued as seized items were inventoried and entered into evidence and reports were written so criminal charges could be filed.”

“One resulted in ½ pound of meth being seized in Huntington. These guys are doing a great job trying to keep our communities safe.”

Residents who would like to report suspicious activity are encouraged to call the ECSO Dispatch Center at 435-381-2404.