ST. GEORGE, Utah, March 14, 2017 (Gephardt Daily) — NBC Universal has announced that the Investigation Discovery episode of “Disappeared” featuring missing St. George teen Macin Smith will air on April 2, and a local group is planning its 14th search for him a day before the episode’s debut.

Macin walked away from home at the age of 17 in the early morning hours of Sept. 1, 2015. April 7 will mark the 19th anniversary of Macin’s birth.

Red Rock Search and Rescue posted on Facebook it is asking for the public’s help with the search, and hoping 30 to 50 volunteers will deploy with its official team.

The search and rescue operation will be conducted near the Warner Valley exit in St. George on April 1 from 8 a.m. to 3 p.m. Volunteers must be able to stay the whole time.

Volunteers can find the group by exiting at Warner Valley, off Southern Parkway and heading east to the RRSAR command post at the top of the hill near the water tank.

The group recommends volunteers wear long pants and hiking boots, and carry a day pack with water, lunch and snacks. RRSAR also recommends participants bring gloves, a walking stick, a hat and sunscreen. Volunteers must be at least 14, and minors need to be accompanied by an adult.

More information can be obtained on the RRSAR Facebook page.

Macin, the last of Tracey Bratt-Smith and her husband Darrin’s six children living at home, walked away when his parents thought he was on his way to school. He left behind his cellphone, wallet, laptop, even his school binder.

“I’m thrilled that there is still interest finding Macin,” she said. “I know that Dave Cummings (RRSAR commander) seems personally invested because he has such a high track record for success. This case even has him stumped. I hope we can find more information out on this 14th search even if it is ruling out another arduous area.”

Bratt-Smith and other family members have posted Facebook updates almost every day to the Help Find Macin Smith page, whose members have swelled in number to 27,537, in the hope of bringing him home. There is a $10,000 reward in place for information leading to Macin’s location.

The Investigation Discovery Channel documentary series “Disappeared” episode is entitled “The Silent Son,” and it will air at 7 p.m. Mountain standard time.

Macin is 6 feet 4 inches tall and weighs 200 pounds. He has light blue eyes and he had short blond hair when he went missing. The Smith family moved to Utah from Canada in spring 2015. Prior to that, Macin was raised in Saratoga Springs, which is west of Lehi. He started kindergarten and attended school through eighth grade in the Saratoga Springs area.

Bench dedicated to missing St. George son Macin Smith is ‘a place to be still’ 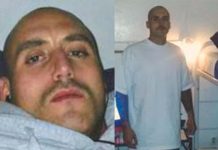