CLINTON, Utah, July 28, 2018 (Gephardt Daily) — An attic fan that was to be replaced on Sunday shorted out Saturday night, causing thousands of dollars in damage to a  home on 950 West.

Clinton, Syracuse and North Davis firefighters responded and arrived to find heavy smoke and flames coming out of the gable end of the structure, Olsen told Gephardt Daily.

Two teenagers who were in the home when the fire broke out were alerted by a neighbor, and they got out safely, along with the family dog, Olsen said.

He said fire crews had the blaze under control within 30 minutes.

“The guys did a heck of a job and got a quick knockdown.”

Olsen estimated the dollar amount of damage at “probably about $30,000.”

The cause of the fire was determined to be electrical.

Olsen said the homeowners told officials that the attic fan had been making noises, and a new fan had been purchased. The owner was planning to replace the old one on Sunday.

No one was injured as a result of the fire. The family of five has been displaced, but Olsen said they have other accommodations, in addition to having family in the area.

Fire causes $100k in damage at business in Clearfield 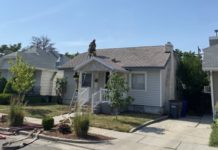