ROCK SPRINGS, Wyoming, Aug. 6, 2016 (Gephardt Daily) — A rollover crash Friday night took the life of one woman and seriously injured five other members of her family, including an 8-year-old girl, who was flown to Primary Children’s Hospital in Salt Lake City.

The accident occurred at about 8:11 p.m. on Interstate 80 west of Rock Springs. Wyoming Highway Patrol Trooper Joseph Minick said of the three adult women and three girls in the Nissan SUV, only two were wearing seatbelts. The four who were unrestrained were ejected from the vehicle.

“The seatbelts were definitely a factor,” Minick said. “The two individuals who were restrained were seriously injured, but not as severely as those who weren’t wearing seatbelts.”

Minick said the SUV was the only vehicle involved. No information was available regarding the condition of the 8-year-old or the other survivors who were transported to area hospitals. Minick said no names have been released, and the accident is still under investigation. 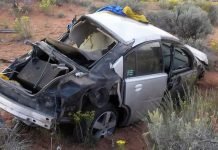