“This investigation started at 12:16 p.m. when SLC911 received information about a crash involving a van and a person near Redwood Road and North Temple Street,” an SLCPD press release said.

“Officers arrived and found the victim on the ground. Paramedics transported the woman to a local hospital in critical condition. No updates on her condition are available.”

Investigators believe the van’s driver was heading north on Redwood Road when he struck the woman as she rode a bicycle “against the traffic signal.”

Police say the driver of the van remained on scene and was cooperating with the  investigation.

“No further information on this case is being released,” the SLCPD statement said. 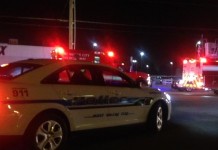