WAYNE COUNTY, Utah, Feb. 18, 2020 (Gephardt Daily) — A woman was killed in Wayne County Tuesday morning after falling some 40 feet during a rappel.

The deceased woman has been identified as a resident of Washington D.C., Wayne County Sheriff’s Office said in a news release on Facebook. While the victim’s name has been released, Gephardt Daily is withholding the name at the request of the next of kin who say not all family members have been notified of their loved one’s death.

The incident occurred at approximately 9 a.m. in the area of Angel Point Cove trailhead, in Hanksville, the news release said.

The reporting party that was doing the canyon rappel with the victim coming out of the slot canyon when she slid 20 feet, then free fell about 40 feet to the bottom of the canyon, the news release said.

Classic Helicopter from Moab was also called to assist in rescue efforts.

“Upon arrival, all agencies assisting in rescue efforts were notified that Fiona did not survive the fall despite life resuscitating measures from her friends,” the news release said.

Woman killed in crash on Interstate 70 in Sevier County 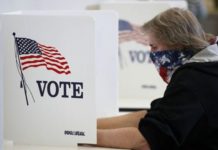