North Summit Fire Service District said in a Facebook post that their fire crews, along with Evanston (Wyoming) Fire Department, arrived on scene, at milepost 192 outside Evanston, just after 5 p.m.

When first responders pulled up, they were startled to find a mangled pickup truck strewn across the highway.

Rescue crews weren’t quite sure what to expect but breathed a sigh of relief when they realized the truck’s driver and his dog had escaped the accident unharmed.

Traffic was closed to eastbound traffic until road crews could clear the debris field.

The cause of the wreck has yet to be determined. 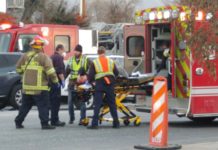