PROVO, Utah, Dec. 2, 2020 (Gephardt Daily) — Provo Fire and Rescue responded to the scene of a structure fire on Wednesday afternoon.

“Multiple stations are on scene of an active structure fire at approximately 5000 N. University Avenue,” said a social media post issued at 1:20 p.m.

Captain Sam Armstrong, Provo Fire and Rescue, told Gephardt Daily the site was an apartment building under construction, so there were no residents, and construction workers inside working on drywall escaped without injury.

Armstrong said workers on the ground floor exterior were working with a flame on the foundation. The heat sparked a fire in the waferboard between the exterior and interior walls, and traveled in the wall from the first story to the second.

“It heated to the point that the waferboard under the stone facade caught on fire,” Armstrong said of the flame that grew into the larger fire. “Then the fire traveled upward in the dead space.”

Armstrong said firefighters need a good knowledge of construction through the decades to fight structure fires. That subject is part of their training, he said, and many firefighters also bring a helpful construction background to the job from previous work.

The fire was doused fairly quickly, Armstrong said. Firefighters stayed on the site for a number of hours to make the fire was out and had not traveled through any additional dead spaces. 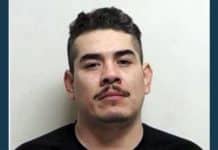