UTAH — October 19, 2015 (Gephardt Daily) – A flash flood watch that was issued over the weekend stayed in place for southeast Utah and southwest Colorado Monday. The National Weather Service said the watch will remain in place until 9 p.m. tonight.

The flash flood watch was initially issued over the weekend for the small southern Utah town of Hildale, as well as other nearby communities. The flash flooding comes just a month after similar conditions took the lives of three women and nine children in the town.

The flooding that hit along the Utah-Arizona border on September 14 is blamed for a total of 20 deaths.

A vehicle carrying three women and 13 children was swept away in Hildale; three children survived. Search efforts continue for six-year-old Tyson Black who was also swept away.

Seven hikers who were canyoneering in Zion National Park and one man who was found in the Ft. Pearce Wash area of Warner Valley were also killed. 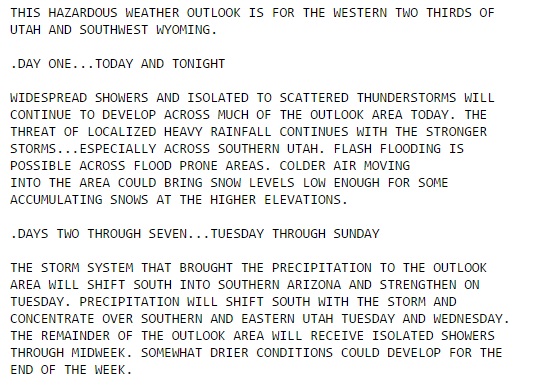