SPRINGDALE, Utah, Sept. 24, 2018 (Gephardt Daily) — Zion National Park’s West Rim Trail, including the route to Angels Landing, has reopened after it was damaged by a thunderstorm in July.

“The popular trail has been closed since an intense thunderstorm on July 11, which caused flooding, mudslides, and rockfalls,” a news release from Zion National Park on Facebook said.

“The heavy rainfall caused major damage in the area of Refrigerator Canyon on the West Rim Trail, which visitors pass to and from on their way to Angels Landing.”

A section of retaining wall failed, as did several protective check dams that were built more than 100 years ago to protect the trail, the news release said.

“The flash flood opened an 18 foot gap in the trail that was over five feet deep,” the news release goes on. “To reopen the passage to Scouts Lookout, Zion’s trail crew stabilized both ends of the trail and built a new custom bridge to span a 30 foot section where the trail and the retaining wall had been damaged or washed away. The crew also built four new check dams to protect the trail from future storms.”

Shuttles will resume dropping and picking up passengers at the Grotto shuttle stop, officials said.

“We appreciate the public’s patience as we’ve worked to recover from substantial storm damage, and I applaud the efforts of the park’s trail crew who worked tirelessly to re-build the trail structures through Refrigerator Canyon” said Park Superintendent Jeff Bradybaugh. 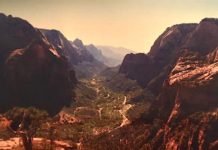