SALT LAKE CITY, Utah, Aug. 29, 2020 (Gephardt Daily) — After much speculation, former Utah Gov. Jon Huntsman, Jr., has announced that he will not run for re-election as a write-in candidate.

His full statement, posted on social media, appears below:

Mary Kaye often speaks of life as a series of chapters. Each unique and many unpredictable. But we alone are the authors of them, even if some play out in surprising ways. We are fortunate to have had so many interesting chapters, none of which we would rewrite – all of which have taught us lessons in risk and resilience.

While the most awkward political primary in Utah’s history is just that…history, we move on with a deep sense of gratitude for family, freedom and the most dedicated supporters imaginable. In fact it is these tireless, irrepressible champions for a better state that have advocated for a write-in campaign, feeling that such a pathetically broken electoral system shouldn’t be the last word. State law even provides for such a remedy.

While we respect the concerned voices of Utahns from every corner of the political spectrum, our earlier words also still hold true — the primary voters have spoken. Even the closest of races like ours are subject to rules, and we respect that outcome. While proceeding with a write-in campaign makes for a great theoretical game, it also carries with it the harm of more division in our beloved state that needs to heal, on many fronts. This must come first.

While there won’t be a write-in effort on our part, we must be honest about concerns and challenges going forward.

Possible irregularities around the Covid Taskforce more than any other factor have held my attention. Because if there was corruption, it should never die in darkness, and power should never silence truth. But mostly, the people of Utah deserve the highest of ethics in government, something we worked hard to maintain as governor, as I hope will be the case with future administrations.

It’s also clear that the most pressing issues confronting our state — including homelessness, mental health and education cannot be solved by politicians alone where words and tweets are confused with action and results. Our problem-solving void must be filled by free citizens who cherish the preservation of liberty and justice. When you have lived and served where we have, you understand how central they are to our continued prosperity, yet both must be vigilantly protected and nurtured with each generation. To that end, Utah is and should continue to be a standard bearer. And we all have roles to play — big and small — in repairing our fractured civilization and striving for a more perfect future. This is what free people do. We will continue to be numbered among you through our family’s service to community and country, ever grateful for the love of family and deeply committed supporters.

May God bless the great state of Utah. 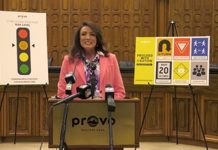 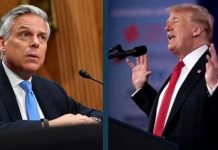