SALT LAKE CITY, Utah, July 16, 2019 (Gephardt Daily) — Friends of murder victim MacKenzie Lueck have created a foundation in her honor, to give her a voice now it has been taken away from her.

Her close friends announced the foundation, ‘MacKenzie’s Voice’ at the Matheson Courthouse Monday, and have also made a Facebook page to promote the nonprofit organization that “will advocate, educate, and celebrate MacKenzie’s life and legacy.”

The body of Lueck, a 23-year-old nursing student at the University of Utah, was found July 3 in Logan Canyon in a disturbed area of soil under a grove of trees. DNA testing of the body returned a profile consistent with that of Lueck.

It was determined by the Medical Examiner’s office that Lueck suffered blunt force trauma to the left side of her skull. Preliminary determination shows the manner of death to be homicide.

Accompanied by the hashtags #MacKenziesVoice and #JusticeforMacKenzie, her friends issued the following statement on Facebook:

“Words do not begin to describe the amount of sadness that we have been feeling over the past few weeks. We know that we share this pain with family, friends, and everyone in the community.

“MacKenzie Lueck was a strong independent woman that always chose to empower herself and those around her. MacKenzie was confident and always knew the right things to say. She was compassionate, loyal and kind to those around her. She is deeply loved and will be missed.”

Ayoola Ajayi, 31, who has been charged with Lueck’s murder, made his first court appearance Monday. He appeared from jail alongside a court-appointed attorney at 10 a.m.

The formal charges filed against him with the Attorney’s Office are:

Ajayi’s next court appearance is scheduled for two week’s time, July 29 at 2 p.m.

The statement from Lueck’s friends went on:

“MacKenzie was excited to serve the community. With ‘MacKenzie’s Voice,’ we will continue to carry on her legacy by being a service to others in need.

“We hope that with the formation of ‘MacKenzie’s Voice’ we can bring light to a dark situation,” the statement continued. “We plan to (a) Continue to advocate for victims of violence in our community, (b) Support families with grief/trauma counseling, (c) Create a ‘manual’ for families and friends and friends of missing person(s), (d) Continue working with police departments to promote educational opportunities regarding missing person(s) investigations and workshops for our community, (e) Focus on finding other missing people.”

Lueck was last seen on June 17 of this year on a surveillance recording when she returned from her Southern California home to Salt Lake International Airport. She was reported missing on June 20.

Cellphone records for MacKenzie showed that she exchanged several text messages with an individual later identified as Ajayi in the early morning hours of June 17. MacKenzie’s last text to Ajayi was at 2:58 a.m.

Investigators determined she was picked up from the airport by a Lyft driver, and was dropped off at 2:59 a.m. at Hatch Park, in North Salt Lake, where she seemed to willingly get into another car before the Lyft driver left to continue with his assigned work.

A forensic analysis of phone records shows Ajayi’s phone was at the park at the same time as Lueck’s, then shows his phone was back at his home, at 547 N. 1000 West, at 3:07 a.m. Friends of Lueck’s have said she and Ajayi were acquainted.

A neighbor who was interviewed said that on June 17, that neighbor detected a “quote ‘horrible smell’ coming from a fire in Ajayi’s backyard,” DA Sim Gill said in a news conference. The neighbor stated the fire was behind Ajayi’s garage in a pit.

During a subsequent search warrant carried out on Ajayi’s home, “detectives discovered what appeared to be a freshly dug site behind Ajayi’s garage. During the forensic excavation of the site, police located a human bone, charred muscular tissue, part of a scalp with hair, a cellphone and other charred personal items.”

Ajayi was taken into custody June 28, and booked on preliminary charges that were later formalized.

Gill noted that Ajayi is presumed innocent unless his eventual trial finds him guilty; the investigation is still ongoing.

Shearer said officials cannot say at this time what evidence was found, or why it might have been in that location.

The location officials searched is approximately one mile from the suspect’s home at 547 N. 1000 West.

The statement from Lueck’s friends concluded: “We want to thank the Salt Lake City Police Department, the North Salt Lake City Police Department, our local government officers, and the many men and women that continue to advocate for MacKenzie. We hope that you will continue to remember MacKenzie how she lived through small acts of service and kindness. We want to give our thanks to those who allowed us to speak out, share our page, share a tip/hint, and who continued to support and share our story with us.” 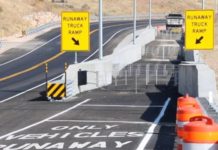