HERRIMAN, Utah, April 11, 2018 (Gephardt Daily) — A GoFundMe page has been set up in the name of the young family that lost its 5-month-old daughter in a traffic accident Monday in Herriman that also injured six others.

The family was identified in the post as Bryce, Tonya, Yuki and Alice Skankey.

The Unified Police Department said the crash occurred at about 7:18 p.m. on Mountain View Corridor, near Rosecrest Road, when a 1997 GMC truck driven by Lawrence Probert, 26, of Kearns, collided with a minivan and a second truck.

It was initially reported that the infant was nine months old, and the toddler was three, but this was later amended by a family friend on the GoFundMe page.

The GoFundMe page was set up Tuesday by Megan Cumrine Fisher, who says she is a friend of the family. It reads:

On the evening of April 9, 2018 Bryce, Tonya, Yuki and Alice Skankey were in a tragic three-car accident, due to a reckless driver off of Mountain View Corrider and Rosecrest Road. Because of this accident the Skankey family lost their young baby Alice at only five precious months. Bryce and Tonya were taken to the hospital, along with their 2-year-old daughter, Yuki.

Our hearts break for this young family and the difficult time they are going through right now. All donations will go towards funeral and medical expenses.

Any donation helps this sweet, loved family. We know the Skankey’s greatly appreciate all of the contributions, prayers and thoughts coming their way.

All donations are going directly to Bryce and Tonya Skankey.

Charges are pending in the three-vehicle accident, but Probert was taken into custody due to his status with Adult Parole & Probation.

Rivera called the crash “horrific,” and said it was “really difficult for first responders.” Most who responded had children or grandchildren the ages of the girls, she said.

“Anytime a child is involved in a crash … your hearts go out to everybody that’s been impacted by this car crash.” 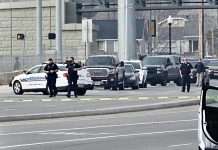