Bone, who who previously served with the Salt Lake City Fire Department for 20 years, died of complications with COVID-19.

A previous UFA statement on Facebook said: “Captain Bone started his career with Salt Lake City Fire where he held the ranks of Firefighter and Paramedic. He was also a member of the Heavy Rescue Program and an active member of UTTF1 where he was deployed multiple times including NYC following the events of September 11th, 2001.”

Bone retired from the Salt Lake City Fire Department in 2006 and joined UFA as a paramedic in August of that year. While serving with UFA, he held the rank of paramedic and, in 2013, was promoted to captain. He “called Station 111 A in Magna, home,” the statement said.

“Captain Bone has been a very influential member of the Fire Service not only to those in the Salt Lake Valley but nationally,” the post said. “Merrill’s legacy will live on in the lives of those he helped mentor in his 35 years of dedication to the service of others.

“Captain Bone, although you may be gone you will never be forgotten.

“We ask that you keep his family in your thoughts at this difficult time.” 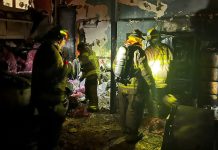 Fire destroys garage of Millcreek home, along with vehicles inside