NEVADA – November 4, 2015 (Gephardt Daily) – Game wardens in Nevada are seeking information about a bull elk that was poached and left to rot near the Pierson Ranch in Lincoln County in late August.

A $2,000 reward is being offered to help catch the shooter.

Officials said they have reason to believe the poachers are from Utah, specifically the St. George or Cedar City area.

A statement from the Nevada Department of Wildlife (NDOW) said the landowner where the crime was committed had a trail camera near the crime scene by happenstance, capturing a fleeting glimpse of two perpetrators riding an ATV during the commission of the crime.

“Because of the trail camera, game wardens know the exact time of the shooting, which took place in the early morning hours of August 29,” the press release said. “With such clear evidence and time of the crime, game wardens hope that someone can help identify who committed the crime.

“We know there’s a witness out there who can tell us who did this,” said Tyler Turnipseed, chief game warden with NDOW. “We have some strong evidence and leads, but we need a little more help to piece it all together so we can catch these guys.”

To report wildlife crime, sportsmen and members of the public can call 800-992-3030. To learn more about game wardens and wildlife in Nevada visit the NDOW website. 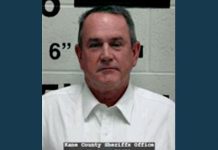