CACHE COUNTY, Utah, March 7, 2016 (Gephardt Daily) — “Ned” doesn’t remember the first snowman he ever built, but he does remember the last.

That would be “Logan Canyon Snowman 2016,” a 20-foot behemoth that stands more than three times the height of its makers, who prefer to remain anonymous.

Just call the planner and builders “Snowman Ned and the Teds,” if you must speak of them at all. They prefer to let Logan Canyon Snowman 2016 stand ─ nearly seven yards high ─ on its own merits.

“This is the first year we officially measured it,” Snowman Ned said. “It was probably 17 or 18 last time. This one is probably 36 to 38 feet in circumstance at the base. ”

Snowman Ned, 45 and from the greater Logan area, built his first snowman placed for comic effect in the 1990s. He and a friend came across his parents’ empty snowmobile trailer in the woods, and built a snowman on it to greet his mother and father upon their return.

Then in 2010, avid outdoorsman Ned and his cousin were hiking near Rick Spring when they came upon a small cliff that was practically begging for a snowy sentinel.

“We said, ‘Let’s build a little snowman on that cliff. It’s a weird place to build a snowman.’ Then we saw a clearing, and we built one across the river, too.

“It was really cool, but so far off the road it was hard to get to,” Snowman Ned said. “The next year, we started trying to find a better place. And we’ve built a snowman every year since except last year, because there was not enough snow.”

“It’s a block or two after the Tony Grove turnoff,” Snowman Ned said. “It’s on the west side of the road, and it’s hard to miss.”

Snowman 2016 took about six hours to create, with nine Teds helping Snowman Ned in the project. The mammoth snowman features painted soda can eyes and buttons, held in place by unseen PVC pipe. Large sticks form its outstretched arms, and twigs are the wild hairs shooting up from its scalp.

Its body is packed snow, not stacked balls of snow, to add stability. Still, Snowman Ned worries about safety and liability, and said his may be his last giant snow beings.

Snowman Ned said his real name got out to the media this year, and his loss of anonymity sucked most of the joy out of the annual project.

“Some of the reporters just talked about me, not the snowman,” said Ned, who did this interview on the condition his real name not be used. “It’s been a downward spiral about how I feel about the whole thing.”

The loss of anonymity, along with concerns about safety and and liability for those who may try to climb Snowman 2016, or knock it over, has Ned thinking this will be his last year for mammoth snowman building.

“Heaven forbid it would fall on somebody,” Ned said. “If someone else wanted to do it I would come up and help… It’s been hard to grow up. I always have to be a kid.”

Snowman Ned said his enjoyment comes from that of the people who visit Logan Canyon Snowman 2016. Some even post their thanks on the snowman’s Facebook page.

“This is awesome thanks to the great people who built this. My kids loved it,” one poster said.

“That was the biggest snowman ever seen. Thank you,” another added.

“You’ve inspired a California girl, and given firsthand pleasure to my Utah relatives,” another wrote. “Thanks for putting forth this tremendous effort!” 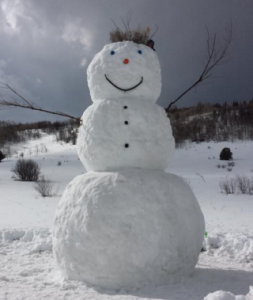