Skinner is the 2020 Tokyo Olympic vault silver medalist, and was previously an alternate for the 2016 Olympic team. McCallum represented the United States at the 2020 Olympics and won a silver medal in the team event.

The tour, which begins Wednesday in Glendale, California, will stop at the Maverik Center on Saturday, Oct. 2, at 7 p.m.

The tour goes until November and will make stops in 35 cities.

Biles said in a statement: “I love the sport of gymnastics and wanted to help create a show that celebrates the pure joy of performing. I believe there is gold inside of us all and it’s time to let that gold shine.”

For tickets to the Gold Over America tour, click here. 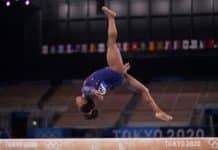