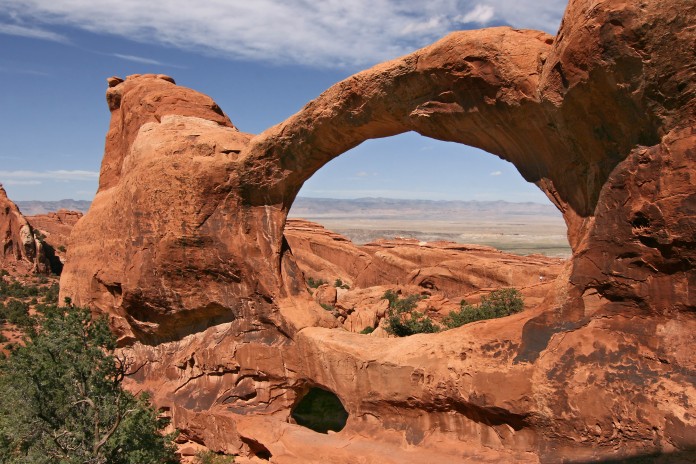 MOAB, UTAH – May 23, 2015 (Gephardt Daily) – Gov. Gary R. Herbert has signed a water right agreement with the U.S. Department of Interior and Arches National Park. The agreement outlines Arches water rights and removes the possibility of future litigation. It also identifies protections for basin water users, including businesses, ranchers, farmers and those that recreate in red rock country.
[one_fourth]

[/one_fourth][three_fourth_last]
“Today’s agreement between the state and federal government once again shows our ability to collaborate and solve complex challenges when we work together,” said Governor Herbert. “These agreements don’t happen overnight. They take time and a commitment from everyone involved, but we came out of this process with a fair and equitable agreement that benefits Arches and the state of Utah.”

A reserved water right was established when Arches National Park was created in 1929. However, the details of that right were not quantified at that time and the state continued to appropriate water in the area following the establishment of the park.

The new agreement means Utah can once again clearly distribute water and regulate the basin’s system while preserving the rights of other water users in the area. As one of the basin’s senior water rights holders, the United States has agreed to allow junior water rights holders to continue receiving their water allocation out of priority. This agreement allows water rights owners upstream, like ranchers and irrigators, to continue their water use unimpeded.

As part of the agreement, Arches National Park receives 120 acre-feet of water for park administrative uses, including the visitor center and campgrounds. Protections are also in place that prevent natural streams and springs within the park from being diverted for other purposes.

“It’s our responsibility to ensure Utah’s natural resources like water are protected, conserved and used wisely for the benefit of our state,” said Mike Styler, Utah Department of Natural Resources executive director. “This agreement allows us to continue to meet the needs of existing water users in the basin, while also meeting the needs of Arches National Park and its desire to protect the park’s streams and springs.”