The sheriff’s office, Grand County Search and Rescue and emergency medical crews hiked about a mile in to where a man had fallen approximately 40 feet, a Grand County EMS Facebook post says.

A sheriff’s deputy was the first to reach the seriously injured man and “was able to provide critical information to EMS providers prior to their arrival, and another SO deputy acted as a radio relay for the incident.”

While GCEMS stabilized and treated the man, Classic Air Medical was called and was able to land a helicopter near the scene, the Facebook post says.

Search and Rescue coordinated transporting the patient over what was described as “steep and unsteady terrain” to the helicopter.

The injured man was transported to St. Mary’s Hospital in stable condition via the Classic Lifeguard helicopter.

“Thank you to all involved agencies for making a difficult situation go as smoothly and safely as possible,” Grand County EMS said in the post. “It’s always a pleasure to work with such capable and professional agencies.” 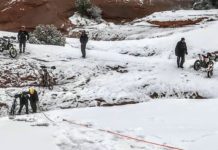 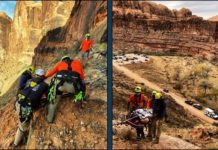