GRAND COUNTY, Utah, Dec. 12, 2020 (Gephardt Daily) — Grand County Sheriff’s Search and Rescue volunteers had a busy Saturday after a snowstorm obliterated all trail markings on the Slickrock Bike Trail and coated the slickrock.

A biker dialed 911 Saturday afternoon when he realized he had no idea where he was and didn’t know how to get back to the SRBT parking lot, said a GCSSAR post on Facebook.

SAR members went to the biker’s location and soon found several other people who were basically stuck and needed help because of the treacherous conditions.

In addition to the first biker, there were three motorcyclists, another mountain biker on the SRBT, and two UTVs on the adjacent Hell’s Revenge Trail, the Facebook post said.

“Ropes and winches from Jeeps were required to assist some people out of precarious situations as they exited the area,” GCSSAR said. “Last but not least (as far as we know), a Jeep rolled over on the Hell’s Revenge trail, and will be there until conditions improve enough to retrieve it.”

Grand County Sheriff’s deputies and a Bureau of Land Management–Utah Ranger assisted in the rescues. 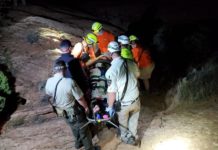