According to a GCSAR post on Facebook, one of the climbers called 911 just after sunset. The climbers thought they were half-way down the North Face of the 400-foot tower and reported that their ropes had become tangled.

“Classic Air Medical transported a team of 3 rescuers to the summit. The rescuers discovered that the climbers had rappelled down the West Face from anchors previously installed to support a high-line between the tower and The Rectory,” the post said.

The high-line anchors weren’t designed for use as rappel anchors, the post explains, “and their position made it difficult for the climbers to retrieve the ropes once at the mid-face belay station.”

One of the rescuers rappelled to the stranded climbers and rigged each of them to rappel with a belay to the base of the rock.

A Utah Department of Public Safety helicopter picked up the climbers and the rescuer and transported them to the staging area at the Castle Valley Fire Station on Castleton Road, the post said.

“After hauling a pair of GCSAR’s 660-foot ropes back to the summit, along with the climbers’ ropes, the remaining two rescuers were picked up by the DPS helicopter around midnight.

“We’d like to remind everyone that temperatures drop precipitously in the high desert after dark, especially during the winter. Please be prepared for unplanned circumstances,” GC SAR said in the post.

They also thanked the Castle Valley Fire Department “for opening the fire station for those in the staging area.” 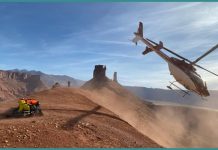 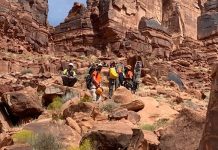