GRAND COUNTY, Utah, July 8, 2016 (Gephardt Daily) — Officials are asking for the public’s help in identifying a body found Sunday in the Colorado River.

Grand County Sheriff’s Office said in a news release the body was found by people on a commercial guided raft, three miles down river from the Westwater Ranger Station, at 11 a.m. July 3.

Search and Rescue and a GCSO investigator recovered the body, and it was transported to the Utah State Medical Examiner’s Office in Salt Lake City.

GCSO said the body is believed to have been in the river for more than three days.

The deceased is described as a caucasian male between the age of 45 and 55, approximately 240 pounds, with three distinctive tattoos. On the upper right arm is a man wearing a hat and holding a handgun standing next to a tree. On the right forearm is a dagger through a heart. On the upper left arm is a wolf head in a circle with feathers.

Anyone with information about the deceased is asked to contact the Sheriff’s Office at 435-259-8115. 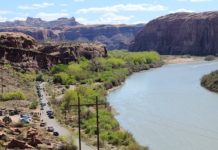 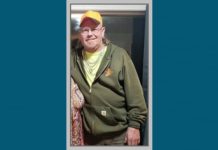