The victim, whose gender was not revealed in charging documents, reported the abuse in an Oct. 16, 2019, interview with officials. The date assigned to the offense in court papers is Oct. 6, 2013.

“During the interview, the reporting party indicated that, beginning when they were 12 years old, the defendant began touching him/her,” says a probable cause statement filed by an officer of the Grantsville Police Department.

The naked child would then be groped, forced to climb onto the defendant, and subjected to the defendant rubbing his organs against the child’s leg, the statement says.

Swan held a “special position of trust” over the victim, the statement says.

The new charges add to the total faced by Swan. On July 22 and 26 of this year, he was charged with:

The alleged victims in the case filed in July were girls, ages 7 and 11, and a boy, 13. Swan was a neighbor and a friend of the family, the probable cause statement says. 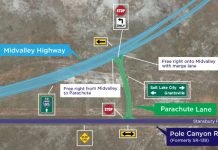