Colin Jeffery “C.J.” Haynie was charged as an adult in the Friday, Jan. 17, shooting deaths and the attempted murder of his father, who was shot but survived.

Another scheduling conference was then set for Feb. 24 at 1 p.m.

During his first court appearance on Monday, Jan. 27, Judge Dianna Gibson ordered Haynie to remain in juvenile detention and said a public defender would be appointed to represent him.

Van Wagoner represented Haynie in court on that Monday, but wasn’t clear at that time if a different attorney would be chosen from the indigent defense fund list, which provides attorneys for defendants who cannot afford one. Van Wagoner said he would apply to be put on the list.

The teen’s bail was set at $4 million — $1 million for each victim. Haynie has been housed at a juvenile detention center.

His father, Colin Haynie, has attended both court appearances.

If the suspect is convicted on the first-degree felony charges, he will face a sentence of at least 25 years to life in prison.

Prosecutors say the teen stayed home from school Jan. 17, and waited for his family members to come home, shooting and killing his mother and a sister shortly after 1 p.m., and then methodically shooting the others as they arrived throughout the afternoon.

C.J’s father was the last to come home. He sustained a gunshot wound in the leg, but managed to wrestle the gun away from his son.

According to a probable cause statement in the case, the younger Haynie told his father that it was his intention “to kill everyone in the house except himself.”

A female neighbor, who happened to stop by the home to return some keys, notified police and drove the elder Haynie and his son to a hospital. Police arrived at the hospital and took the suspect into custody. The teen reportedly did not resist arrest, but was uncooperative and refused to talk with the officers.

No motive has been established in the shooting.

Friends and neighbors from the close-knit Grantsville community, as well as people from other areas, attended the service to show support and give some comfort to the surviving members of the Haynie family. 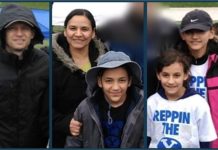 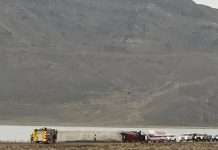