The First Presidency of The Church of Jesus Christ of Latter-day Saints has announced groundbreaking dates in 2019 for the temples in Pocatello Idaho (March 16) and Yigo Guam (May 4), a news release from the LDS Church says.

“Latter-day Saint temples differ from meetinghouses or chapels where members meet for Sunday worship services,” the statement says. “Temples are considered ‘houses of the Lord’ where Jesus Christ’s teachings are reaffirmed through baptism and other ordinances that unite families for eternity.

“In the temple, Church members learn more about the purpose of life and make covenants to follow Jesus Christ and serve their fellow man.”

The Pocatello Temple will be located east of Satterfield Drive and Butte Street in a subdivision known as Crestview Estates – Division 2, the statement says. The ceremony will be for invited guests only, “with the general public invited to view the proceedings live from local meetinghouses.”

The Pocatello Temple will be Idaho’s sixth.

At the groundbreaking for the Guam LDS Temple, Elder Yoon Hwan Choi, president of the North Asia area for the church, will preside. As with Pocatello, invited guests will be at the site, and the ceremony will be fed to area churches for those who want to watch.

The temple will be located at the corner of Marine Corp Drive and Melalak Drive in the village of Yigo, on the north end of Guam.

This will be the first temple in Guam, an unincorporated and organized territory of the United States in Micronesia in the western Pacific Ocean. The temple was first announced October 7, 2018, by Church President Russell M. Nelson.

Construction on the temple with an adjacent meetinghouse is expected to take about two years to complete.

The Church currently has 201 temples announced, under construction or operating worldwide. 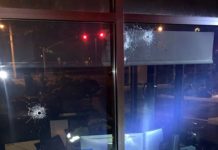