HARRISVILLE, Utah, May 20, 2019 (Gephardt Daily) — Harrisville Police officials are searching for a driver who fled the scene of an auto-pedestrian accident on Larsen Lane in the early hours of Sunday morning.

Officials responded to an auto-pedestrian accident at 1 a.m. where the driver of the vehicle left the scene, said a news release from Harrisville Police Department on Facebook.

The victim is a 34-year-old male from the Ogden area, the news release said. The victim sustained multiple non life-threatening injures and remains hospitalized at this time.

According to the witness, the suspect did not hit the brakes before or after the accident and continued eastbound, turning north on Washington Boulevard.

Anyone who has information about the incident is asked to call Weber County Sheriff’s dispatch at 801-629-8221. 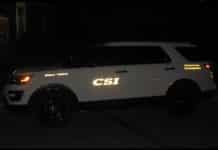