HEBER CITY, Utah, Oct. 6, 2020 (Gephardt Daily) — Police responded to a report of drugs in a camp trailer outside of a residence Tuesday afternoon and, according to a Heber City Police Department news release, they found a cache of drugs and firearms in the home.

The man who lived in the residence “showed up on scene before the warrant was served,” the news release said.

After serving the warrant and entering the home, officers found a woman hiding in the basement.

They also found methamphetamine, marijuana, paraphernalia, and seven firearms, and seized these items from the home, according to the news release.

“Bryan Jordan was arrested and booked into the Wasatch County Jail on charges of possession of schedule I/II controlled substance (meth), possession of marijuana, possession of paraphernalia, and seven counts of category II restricted person in possession of a firearm,” the release states. 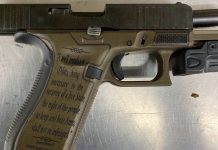