HEBER CITY, Utah, May 8, 2019 (Gephardt Daily) — This year’s Bonanza Campout in Heber City has been cancelled after organizers did not receive the necessary licensing, it was announced Wednesday.

“We regret to inform you that due to being denied the necessary licensing and permits from Wasatch County and the Utah DABC (Department of Alcoholic Beverage Control), Bonanza Campout has made the decision to cancel this year’s event,” said a statement on the event website.

The campout, which would have been the fourth of its kind, had been set to run June 21 to 23 at River’s Edge RV Resort at 7000 Old Highway 40 in Heber. Performances were to include G-Eazy, DJ Snake, Empire of the Sun, Griz, Blackbear and Machine Gun Kelly.

“Our team is committed to providing top-tier fan experiences and works year round to curate and produce a world-class festival environment,” the statement said. “After reviewing all alternative options, we have come to the conclusion that there is no possible way to relocate the festival and still provide both artists and attendees with the same level of production and fan experience that Bonanza Campout has become known for.”

All ticket and lodging purchases for the event are in the process of being refunded.

“We are truly grateful for all of the support we’ve seen over the years from our fans and are committed to honoring the community that has bolstered the development of Bonanza Campout and helped to create something truly unique to Utah,” the statement went on. “We understand that without you, none of this would be possible.”

The festival will be returning in 2020, organizers said.

Anyone with questions is asked to email [email protected] 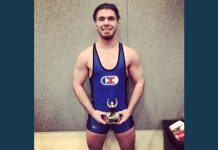