JAMESTOWN, Wyo., Feb. 3, 2022 (Gephardt Daily) — A passerby saved a 34-year-old mother and four children from an early-morning fire Tuesday, when he saw smoke and flames coming from their Jamestown, Wyoming, home and no emergency lights anywhere.

“Ryan Pasborg, 32, of Green River, was running late for work Tuesday morning as he traveled down Highway 374 towards town when he smelled smoke and saw flames coming from a bedroom window of the home,” the Sweetwater, Wyoming, Sheriff’s Office said in a Thursday news release on Facebook.

Pasborg pulled into the driveway and saw a young girl and two boys come out of the home.

The children told Pasborg that their mother and 4-year-old brother were still inside, so without hesitating he went through the garage and into the smoke-filled kitchen.

Crawling through the heavy smoke on his hands and knees, Pasborg traveled several feet across the kitchen until he bumped into the small child.

“He immediately grabbed the boy around the waist, picked him up and carried him outside,” the new release says.

“With a windchill temperature well below zero, Pasborg quickly put all four children in his truck to keep them warm before entering the burning home a second time, this time crawling through the kitchen deeper into the house in search of the children’s missing mother.

“Moments later, Pasborg found the woman lying on the floor, badly burned and struggling to breathe. After dragging her outside, he noticed that she was unresponsive and no longer breathing, so he began performing lifesaving measures until she suddenly took a gasp of air and sat up.

“Pasborg then drove the family away from the raging fire to the end of the driveway near the highway and awaited the arrival of emergency first responders.”

The news release goes on to say that, according to sheriff’s office spokesperson Deputy Jason Mower, Pasborg later took it upon himself to purchase several hundred dollars’ worth of clothing and necessities and personally delivered them to the family at their grandmother’s house.

Sheriff John Grossnickle said, “Not only is it a blessing in its own right that Mr. Pasborg was in the right place at the right time, but his willingness without second thought to risk his own life to help save this family was the difference between life and death for this young mother and her child; he gave them a fighting chance.”

Grossnickle lauded Ryan Pasborg for his bravery, calling him “a perfect example of what it means to be a real hero.”

Officials believe the fire was sparked by a malfunctioning hoverboard. To read a Green River Fire Department update on the blaze, click here. 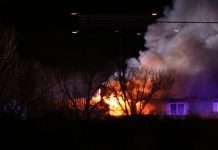 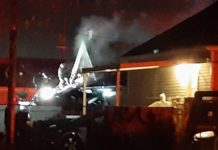 Fire crews battle blaze in Ogden home, cause under investigation 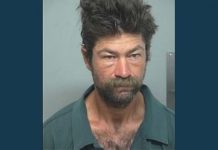