The Herriman City Police Department received a call at approximately 5 a.m.
from a woman “who had been threatened by an unknown suspect in possession of a firearm,” said a news release.

The victim was jogging in the area 14068 S. Rosecrest Road when the suspect stepped out from behind a barrier and pointed the firearm at the victim, the news release said.

The victim was able to escape without injury and contact police.

“We are grateful the victim in this case was physically uninjured and urge our citizens to be aware of their surroundings and take precautions when necessary to protect themselves,” the news release said.

The suspect is described as an adult male, with a dark complexion, wearing all black clothing.

Anyone who may have seen the suspect, or was in the area, is encouraged to contact the Herriman City Police Department at 801-840-4000. The reference number in this case is HR20-12205. 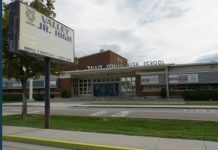