“From Aug. 16-27, F-16s from Aviano Air Base, Italy, and F-35As from Luke Air Force Base, Arizona, will be stationed at Hill for WSEP West,” said a news release. “F-35s from Hill Air Force Base will also participate in the exercise and B-52s from Barksdale AFB, La., will be evaluated from off-station.”

During the exercise, also called Combat Archer and Combat Hammer, airmen evaluate all aspects of air-to-air and air-to-ground weapons employment, from building and loading munitions, to aircraft and pilot performance hitting targets on the Utah Test and Training Range, the news release said.

WSEP missions launched from Hill are in addition the 388th and 419th Fighter Wings’ normal flying operations, and the airfield will be active from 8 a.m. to approximately 8 p.m. each weekday. 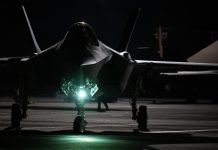