Fire was reported at about 10 a.m. in the 1902 chapel at 185 P St., just south of the Salt Lake City Cemetery. The chapel, currently under renovation, belongs to The Church of Jesus Christ of Latter-day Saints 27th East Ward.

“Our units initiated an attack on the fire, found it to be in the roofing area, relatively small fire, but a fair amount of smoke.”

The fire was brought under control quickly, Steadman said. It was in the rafter area of the church’s vaulted ceiling.

The fact that the renovation was in progress makes it hard to assess damage, he said.

“We haven’t really had the time to look at where they’re at in that process,” Steadman said. “We do have our investigators on scene right now to determine the final cause and determination.”

Reports that the fire was sparked by welding are not yet confirmed, Steadman said.

“Once we complete our investigation we will turn it back to the owner,” he said. “I believe the damage is minimal, but a pretty smokey little fire.”

Gephardt Daily will update this story as information becomes available. 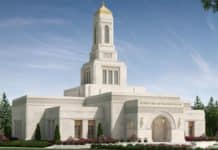