GOSHEN, Utah, April 11, 2021 (Gephardt Daily) — A suspected hit-and-driver was killed Saturday when investigators say he lost control of his vehicle while fleeing police and crashed into a tree.

According to Utah Department of Public Safety Agent Colton Freckleton, calls about a hit-and-run driver began coming in around 6:00 pm. He said a hit-and-run victim followed the suspect’s 1996 Chevy Tahoe and guided Santaquin Police to their location.

Freckleton said pursuing officers called for assistance from the Utah County Sheriff’s Department as they approached the county’s jurisdiction.

While the sheriff’s department has a no-pursuit policy, Utah County deputies decided to join in the chase as the Tahoe drove erratically while racing north on 3200 West at speeds between 60 and 80 miles an hour.

The pursuit came to an abrupt end at 4765 South in Goshen, when the driver veered to the left, seemed to overcorrect to the right, before running off the road and slamming into a tree, Freckleton said.

The driver, believed to be a 37-year-old man from Springville, was pronounced dead at the scene.

The Utah Department of Public Safety is leading the investigation. 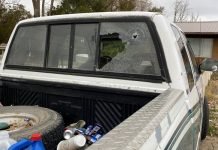 Deputies searching for suspects after windows of vehicles, buildings shot out in Goshen