Suspect Sorano Otup, 23, has been booked into the Davis County Jail on multiple charges, including:

Otup’s probable cause statement, filed by an officer of the Farmington Police Department, said events began to unfold about 8 p.m. when officers were called to a fight involving two males near 64 W. Joy Drive.

According to a witness account, the two men were fighting at the side of the road when one of them, identified as Otup, climbed into a car and was driving away when he “turned 360 degrees and struck the victim.”

Otup then drove away, the probable cause statement says.

“A short time later a collision was reported at 650 W. State Street. A vehicle meeting Otup’s description fled from the scene. A UHP Trooper located Otup near Park Lane and Main Street. He attempted to stop Otup, who fled south on Main Street,” police said.

A deputy on patrol soon located Otup after he collided with a building near 50 South 200 East. The deputy said Otup turned off his vehicle’s lights and fled.

The deputy gave chase as Otep traveled toward the initial scene before colliding with a Farmington fire engine.

The pursuit came to an end when the officer, who filed the probable cause statement, performed a PIT maneuver on Otep’s car, the statement says. Otep was taken into custody. Neither he nor the police officer were injured.

Police say after being read his Miranda rights, Otep stated “he had consumed a 6-pack of beer prior to leaving Salt Lake City,” and “was driving the vehicle while consuming Jack Daniels…”

Otup also indicated his first victim, who was taken to the hospital with minor injuries, was an extended family member.

Otup is currently being held with bail. 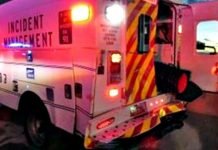