ELKO COUNTY, Nevada, Oct. 22, 2021 (Gephardt Daily) — The body of a woman has been located in the Coal Mine Canyon area of Elko, Nevada.

“On Oct. 21 at approximately 10:30 a.m., the Elko County Sheriff’s Office received a call that a hunter had found an unidentified body in the area of Coal Mine Canyon,” said a news release from the sheriff’s office.

Detectives responded to the scene and determined that the body was that of a female.

“Due to the condition of the female, an identity could not be determined at the scene,” the news release said. “A full autopsy will be conducted to determine the cause of death and identity of the victim.”

The case is being investigated as a homicide.

Anyone who has information about the case is asked to call the Elko County Sheriff’s Office Tip Line at 775-748-1684. 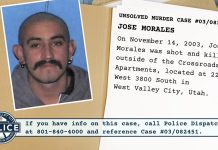